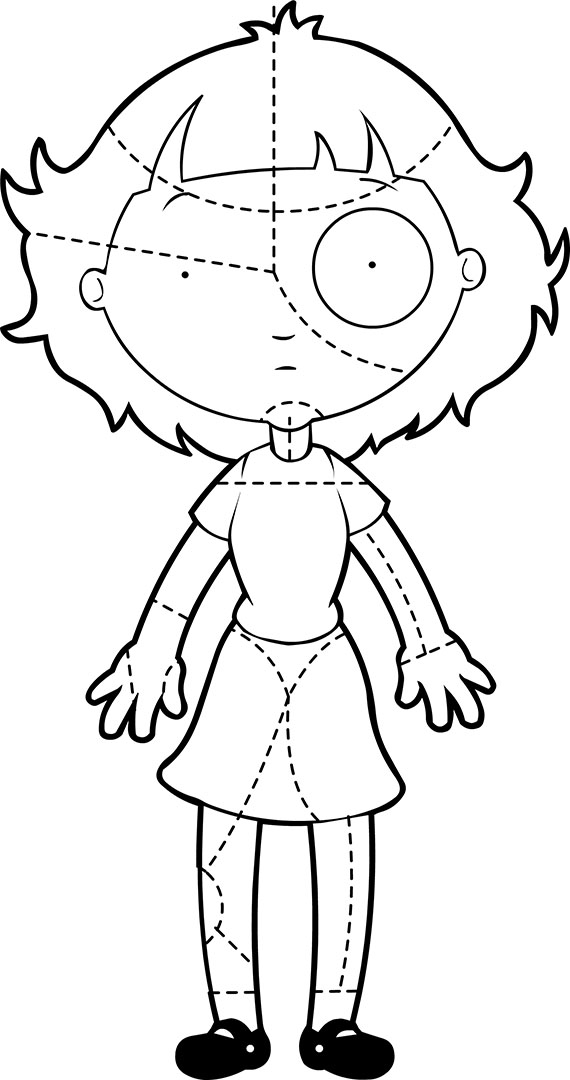 Pepita arrives with a tidy suitcase, full of fears and expectations. This frail and sharp little woman (a mixture of woman and child), who does not disdain psycho/entanglements, constantly hesitating between reality and the unconscious, examines and lives with cynicism and irony many weaknesses and discomforts of the human being, mainly of the feminine world.

In this work, Pepita gives special attention is given to the objects with which she surrounds herself ,in particular, the mirror, the feeding bottle, the wardrobe, her gun and her extremely cultured dog Cyclop. Pepita is repressed by time, solitude and, above all, by her projections but, in the meantime, she is so disorderly and yet strong that she manages to overturn them for a few seconds at least, as if by magic. The sympathy and the charm of Pepita lies in this, she is a contemporary being struggling with her ego…

Small eye and big eye: difference in her way of perceiving reality;

small eye:the more rational, big eye: the unconscious which transfigures reality, allowing her to see things which are only in her mind.

Pepita is about 30 years old: Continuous and not always harmonious mutations between being a woman and a child. Sometimes she is frustrated because of her physical but also psychological appearance (which is undoubtedly the more delicate part).

She is full of neurosis, insecure; she is subdued by her feeding bottle-mother, hanging on every word of the shit/mirror, inseparable from the cultured Cyclop.

She is greatly attached to her things. She thinks of herself as generous, is instead very selfish, or rather, always self-referring, but she makes love very liberally.

She loves her gun and her tranquillizers. They represent the blanket of Linus, they calm her down.

She is obsessed with order and cleanliness.

She can’t stand noises in her apartment building while she is trying to sleep. When she gets excited she suffers from herpes.

She has murderous tendencies especially towards the mirror. When she reacts to harassment (real or invented) she is often out of time. She owns a dog with a single eye called Cyclop, the ‘opportune’ figure. She has only one idol, Queen Elizabeth,Teacher of style.

She very often talks to objects which in front of her come to life, become animated. She is cultured on average but Cyclop is her encyclopaedia. She doesn’t give a damn about politics but she is global; Cyclop is no-global.

Freedom, like its numerous contradictions, is one of the reference marks of this character.

The future is conceived without precise limits but with a continuous vivification of life.